Team Rock was a martial arts group act from Season 8 of America's Got Talent. They were likely eliminated in the Vegas Round.

Team Rock's audition in Episode 803 consisted of performing Tae Kwon Do feats such as breaking three boards with three kicks in one leap and breaking a board with a backflip. The full verdict was not televised, but Howie Mandel buzzed the act. Although he voted "No", Mel B, Heidi Klum, and Howard Stern voted "Yes", sending the team to the Vegas Round. 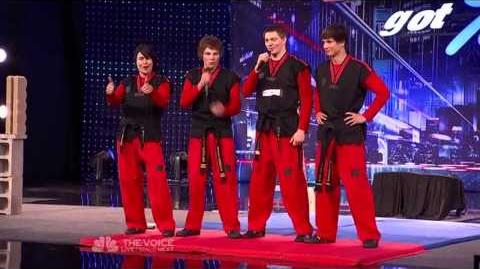 It is unknown whether or not Team Rock was present during the Vegas Round as they were never seen, but even if they were, they did not advance to the Quarterfinals.

Retrieved from "https://agt.fandom.com/wiki/Team_Rock?oldid=104059"
Community content is available under CC-BY-SA unless otherwise noted.