The 2nd Story Guys were a group of stilt dancers from Season 2 of America's Got Talent. They were eliminated in the Semifinals.

The group known as Second Story Guys is from Orlando, Florida and is composed of Christian De Leon, Keith Hinson, Dustin Ehrlich, and James Balcer. The members have been together for over 10 years. 1

The 2nd Story Guys' audition in Episode 203 consisted of performing a dance routine on stilts. Piers Morgan, Sharon Osbourne, and David Hasselhoff all voted "Yes", sending the group to the Vegas Round.

The 2nd Story Guys were sorted into the "Variety" category during the Vegas Round. Their performance in Episode 205 consisted of leaping over each other and dancing on stilts. Their audition was strong enough for the judges to send them to the Semifinals in Episode 206.

The 2nd Story Guys' Semifinals performance in Episode 208 consisted of a disco-style dance on stilts involving two-person cartwheels. They did not receive enough votes to be sent to the Top 10, eliminating them from the competition in Episode 209. 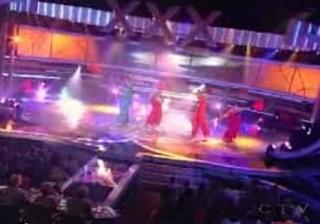