America's Got Talent Wiki
Register
Don't have an account?
Sign In
Advertisement
in: Acts, Rejected Acts, Dancers,
and 11 more

Darius Reed, aka The Bigger Cheese, is from Paterson, New Jersey. He is a singer/dance/rapper/actor/comedian; he does it all. He works at a post office for a living. [1]

In 2017, he also auditioned for Season 14 of So You Think You Can Dance, where he was eliminated in the audition round.

The Bigger Cheese's audition in Episode 903 consisted of dancing to and singing Lady Gaga's "Venus." Howard Stern, Heidi Klum, Mel B, and Howie Mandel all buzzed the act. All four judges voted "No," eliminating the act from the competition. 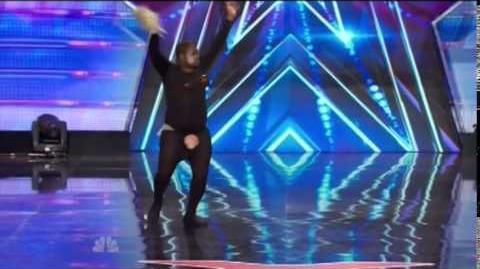 The Bigger Cheese returned in Season 12. His audition in Episode 1206 consisted of dancing. Simon Cowell buzzed the act. All four Judges voted "No" eliminating him from the competition.