America's Got Talent Wiki
Register
Don't have an account?
Sign In
Advertisement
in: Acts, Rejected Acts, Season 1 Acts,
and 6 more

None
The Boofont Sisters were a vocal duo act from Season 1 of America's Got Talent. They were eliminated in the audition round.

Ruby & Vicky hail from Reno, Nevada, but currently live with their Sister Sapphire in Silver Lake, CA. The Sisters come from a long line of performers, most notably their mother, Billy Light Boofont. Billy Light’s Freaks on Parade was the biggest freak show in the country, with Billy being the biggest draw as the bearded lady. Billy promised the girls when they were old enough they could join the show and be a part of the family legacy. Their mother never returned. Ruby & Vicky were forced to grow up in foster care. The Sisters were alone in this world. Then one day a young woman showed up at their mobile home door in Reno and announced she was their half sister Sapphire. She had the vision to turn tragedy into song & dance.

Ruby and Vicky Boofont have been entertaining audiences for over 9 years with their unique blend of comedy, cabaret, burlesque, and audience participation. Originally from Reno, Nevada, The Boofont Sisters carved a niche for themselves in Chicago, Michigan, New York City, and now Hollywood. The Boofont Sisters are regular performers at Gentry on State, Gentry on Halsted, and Davenport’s Piano Bar in Chicago. They were weekly celebrity contestants in Roscoe’s Game Show as well as weekly guests on New York City’s hit cable access show “That’s Kententainment”. The Boofonts have written, directed, and produced shows including “Two Big Broads” at the Bailiwick Arts Centre and “Goodbye Chicago” starring Shirley Q. Liquor at the Lakeshore Theater. The Sisters have been guest performers at clubs such as The Big House, Voltaire, Sidetrack, Glee Club, and Touché. Every summer they play to sold out shows at the Dunes Resort in Saugatuck, MI. The Sisters made their California debut as special guests at Revolver in West Hollywood. They have guest starred with Mink Stole, Momma, Daniel Cartier, Bridgette of Madison County, Judy Tenuta, Jim J Bullock and the world famous Jackie Beat. They have also performed at Drag Strip 66, The Wyndham Bel Age Hotel, The Parlour Club, Mother Load, MJ’s, AkBar, The Cavern Club and the famous Celebration Theater in West Hollywood. The Boofont Sisters can be seen on the small screen in “Flaunt Live” as well as on the big screen in their debut “Flirting With Anthony”. [1]

The Boofont Sisters' audition in Episode 101 consisted of singing "Total Eclipse of the Heart" as a duo. Piers Morgan, Brandy Norwood, and David Hasselhoff (Brandy buzzed for him) all buzzed the act. All three judges voted "No," eliminating the act from the competition. 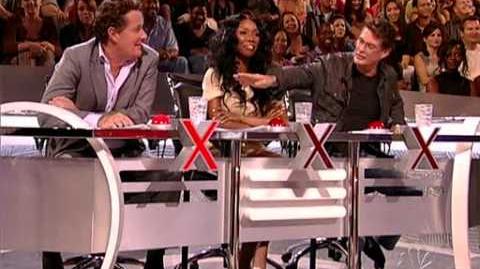