Larry and Jim of the hand band, which is from North Hampton, Pennsylvania, are classically trained, with 76 combined years of practice. The Pennsylvania Hand Band is a musical novelty act consisting of two manualists (hand musicians). The three have teamed up to form an extremely rare act – an entire band of body-part musicians. Together they can play many genres of music with or without a karaoke background. [1]

Pennsylvania Hand Band's audition in Episode 204 consisted of its members squeezing their hands together to Britney Spears' "Oops!... I Did It Again". Piers Morgan, Sharon Osbourne, and David Hasselhoff all quickly buzzed the act. All three judges voted "No," eliminating the group from the competition.

Two members of the Pennsylvania Hand Band returned to Season 11 as "The Four Squeezins". Their audition in Episode 1104 consisted of one member squeezing his hand and the other playing a kazoo to "Theme from A Summer Place". Their verdict was not televised, but Howie Mandel, Mel B, Heidi Klum, and Simon Cowell all buzzed the act. All four judges voted "No", eliminating them from the competition. 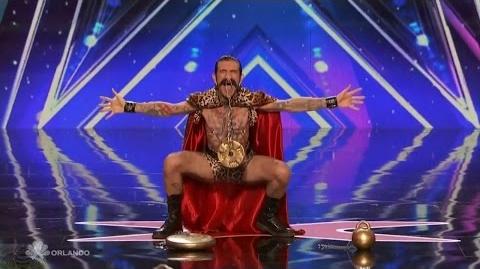 Retrieved from "https://agt.fandom.com/wiki/The_Four_Squeezins?oldid=173496"
Community content is available under CC-BY-SA unless otherwise noted.