Judge Cuts
The Human Flags was a pole acrobat duo act from Season 10 of America's Got Talent. They were eliminated before the Judge Cuts

The Human Flags consists of Karen Goudreault and Dominic Lacasse, both from Québec, Canada. They performed on French version of Got Talent called La France a un Incroyable Talent, recieving the golden buzzer from French actor Olivier Sitruk however being buzzed by Canadian creator of Just For Laughs Gilbert Rozon during their live performance. They married just before their audition.

The Human Flags' audition in Episode 1007 consisted of performing acrobatic feats on a pole such as Dominic holding onto the pole with his hands and staying steady while Karen stepped on his torso. Howard Stern, Heidi Klum, Mel B, and Howie Mandel all voted "Yes," sending the duo to the Judge Cuts round. 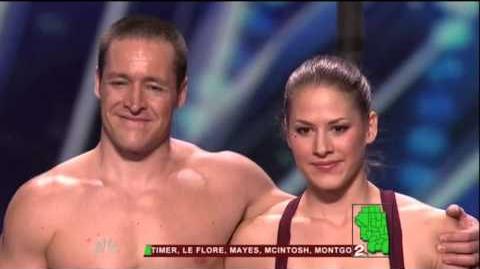 The Human Flags did not perform in the Judge Cuts round, meaning they either withdrew or were cut by the judges before this stage of the competition.