America's Got Talent Wiki
Register
Don't have an account?
Sign In
Advertisement
in: Acts, Accepted Acts, Vocal Groups,
and 4 more

Judge Cuts
The Janes were a vocal group act from Season 13 of America's Got Talent. They were eliminated before the Judge Cuts.

The Janes are a pop and R&B girl group comprised of Kelly Crapa, Llyra Alexandra, Jaime Swartz, and Tayla Cornelia. [1] [2]

Kelly competed on Season 3 of The Voice, where she was eliminated in the Battle Rounds.

The Janes' audition in Episode 1303 was barely aired, and what they sang is unknown. The verdict was not televised either, but Howie Mandel buzzed the act. Although he voted "No", Mel B, Heidi Klum, and Simon Cowell voted "Yes", sending the group to the Judge Cuts. 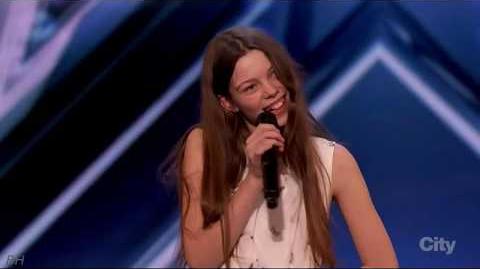 The Janes did not perform in the Judge Cuts round, meaning they either withdrew or was cut by the judges before this stage of the competition.