America's Got Talent Wiki
Register
Don't have an account?
Sign In
Advertisement
in: Acts, Season 1 Acts, Rejected Acts,
and 4 more

None, unknown
The Laughing Yogi was a comedy yoga guru act from Season 1 of America's Got Talent. He was eliminated in the audition round.

Guru Yogi Ramesh is one of the finest laughing yoga teachers in the world. His ability to bring tears of laughter to all those who practice with him is truly a gift from the heavens. He began Yoga at the age of five, and has been practicing every day for over forty years. Yogi Ramesh has been teaching his knowledge of Yoga for the more than a quarter century.

He is a member of the California Yoga Teachers Association, and the founder of the Universal Yoga Center. He produces the television show “Universal Yogi” which has been airing for the past twelve years. He has also appeared on NBC, CBS, and ABC on programs such as Oprah and the Roseanne Show, where he promotes the healing benefits of Yoga. He has been featured in numerous publications as well, including the Los Angles Times (“Ramesh Pandey A Better Body by Boreathing”) and the US News (Ramesh Pandey – Universal Yoga Guru). [1]

The Laughing Yogi's audition in Episode 103 consisted of demonstrating yoga moves and trying to make the audience "happy and relaxed". Piers Morgan, Brandy Norwood, and David Hasselhoff all buzzed the act. All three judges voted "No," eliminating the act from the competition. 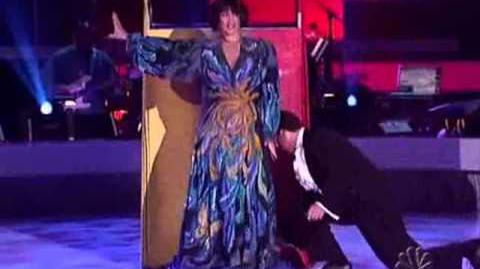 The Laughing Yogi was seen briefly backstage in Episode 1505 of Season 15 prior to Josefina Monasterio's audition. It is unknown if he advanced past the audition round.

The Laughing Yogi currently has the record for longest gap for a returning act, being 14 years. This was later tied by John Morgan who was on Season 3 and returned in Season 17