The Magic of Eli Kerr

The Magic of Eli Kerr

Vegas Round
The Magic of Eli Kerr was a magician act from Season 2 of America's Got Talent. It was eliminated in the Vegas Round.

The Magic of Eli Kerr's audition in Episode 202 consisted of fire-eating, and performing magic tricks such as making his assistant disappear, sticking flaming rods in a metal box, pulling them back out, and making his assistant re-appear, along with a second assistant. Piers Morgan, Sharon Osbourne, and David Hasselhoff all voted "Yes", sending the act to the Vegas Round. 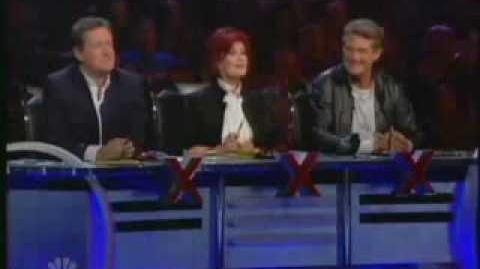 The Magic of Eli Kerr was sorted into the "Variety" category during the Vegas Round. Their performance in Episode 205 consisted of Eli attempting to produce his assistant and a number of birds from a shadow box. Unfortunately, the act suffered a prop malfunction during the audition, leaving the judges unimpressed. The audition was not strong enough for the judges to include it in the Top 35 shortlist, eliminating it from the competition along with John Mitchell and Hollywood Steppers