America's Got Talent Wiki
Register
Don't have an account?
Sign In
Advertisement
in: Acts, Rejected Acts, Novelty Acts,
and 4 more

The Man of Mystery

The Man of Mystery

None
The Man of Mystery whose real name is Jeff Alan, was a comedy escape artist act from Season 12 of America's Got Talent. It was eliminated in the audition round.

The Man of Mystery's audition in Episode 1201 consisted of having host Tyra Banks and Howie Mandel act as assistants locking up his wrists and tying him up. After the two assistants helped him into a red bag, he tried to escape. When he took too long, Howie, Mel B, Heidi Klum, and Simon Cowell all buzzed the act. He eventually emerged, however, unchained and wearing a dress. Simon and Mel both took back their buzzers. Although Mel and Simon voted "Yes," Howie and Heidi voted "No," eliminating The Man of Mystery from the competition. 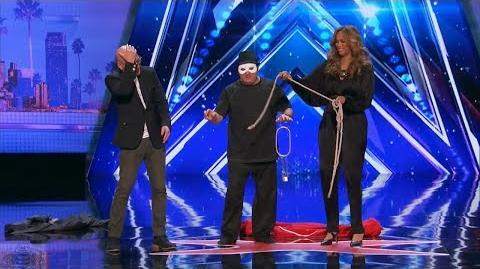