Quarterfinalist
The Platt Brothers was an acrobatic dance trio act from Season 4 of America's Got Talent. It was eliminated in the Quarterfinals.

Boone Platt, Cheetah Platt, and Cy Platt are The Platt Brothers. The brothers grew up in rural Ukiah, California. Raised without television, the Platt Brothers were free to explore their creativity through games and make-believe adventures on their family's sixteen acres of oak forest. These creative games eventually led the brothers to pursue life on the stage as singers, dancers, actors, acrobats, and all-around entertainers. In 2007, the three brothers finally decided to combine their talents and create something they could all be a part of. They moved to San Diego to pursue this dream and are now living together and working on their show. They make a living teaching theater in elementary schools, and coaching gymnastics. [1]

The Platt Brothers' audition in Episode 407 consisted of performing a dance routine with miming (drinking of water, tossing of can onto another brother), two brothers holding onto each other by the waist and then spinning, and finally tossing one member into the air and that member performing a backflip midair. Piers Morgan, Sharon Osbourne, and David Hasselhoff all voted "Yes", sending the trio to the Vegas Round. 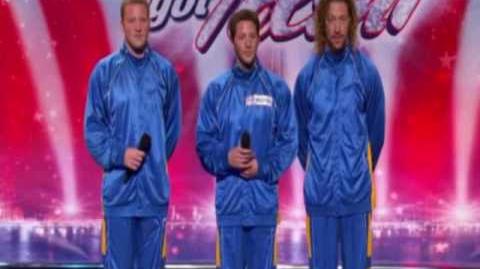 The Platt Brothers appeared without performing in the Vegas Round. The group's audition was strong enough for the judges to send it to the Quarterfinals in Episode 411 along with Acrodunk.

The Platt Brothers' Week 1 Quarterfinals performance in Episode 413 consisted of a comedy acrobat routine with jumping and falling straight to the floor, mimicking different martial arts techniques based on different kinds of animals, mimicking fighting each other, and a ballet dance. The routine ended with portraying one of the brothers being tossed through the ceiling. The trio did not receive enough votes to be sent to the Semifinals, eliminating it from the competition in Episode 414 along with The Diva League, instead of Grandma Lee. 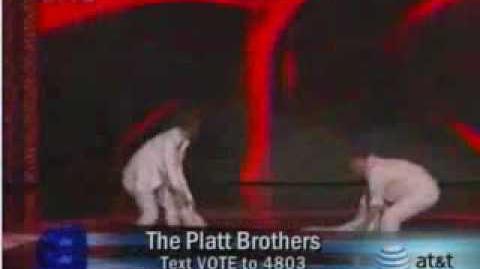 The Platt Brothers have all appeared as contestants on the second season of American Ninja Warrior, but none of them made it past the first round.

Cheetah Platt appeared with his wife Rhiann on the 2016 revision of To Tell the Truth, which featured their story about being married 50 times.