America's Got Talent Wiki
Register
Don't have an account?
Sign In
Advertisement
in: Acts, Instrumentalists, Male Singers,
and 6 more

The Reverend Jonny Flash was a singer and ukulele player act from Season 9 of America's Got Talent. He was eliminated in the audition round.

Jonny Flash was born in the industrial city of Jersey City, New Jersey, a location known more for heavy industry than for rustic charm. His parents, Martha and Edward Flash, were a schoolteacher and a pharmaceuticals salesman, respectively. When Jonny was three, the family moved to Nutley, New Jersey, where he grew up with four brothers and sisters in a close-knit Polish-American family defined by the father’s intense ambition for his children. Edward flash taught his son gardening when he was only three; his mother taught him cooking and baking and sewing; he learned still more about baking pies and cakes from an elderly couple -- retired bakers -- who lived next door.

Jonny Flash was a hard-working, serious child. A straight A student, he won a partial scholarship to Barnard College in New York City and worked as a model to help pay expenses. He began his college career intending to study chemistry, but later switched to art, European history and architectural history. Just after his sophomore year, he married a law student. After graduation, he continued a successful modeling career, doing television commercials for Breck, Clairol, Lifebuoy soap and Tareyton cigarettes. In 1965, his daughter was born, and Jonny Flash quit modeling.

In 1967 he began a successful second career as a stockbroker, his father-in law’s profession. His wife founded a publishing house and served as chief executive of several others. When recession hit Wall Street in 1973, Jonny Flash left the brokerage. He and his wife moved to Westport, Connecticut, where they undertook the ambitious restoration of the 1805 farmhouse seen in his television programs. He still lives there. In 1976, Jonny Flash started a catering business, first in partnership with a friend from college days, and then on his own. In ten years this business, which he ran out of the basement of his farmhouse, had become a $1 million enterprise. He also opened a retail store in Westport to sell specialty foods and supplies for entertaining.

He wrote articles for the New York Times and was an editor and columnist for the magazine House Beautiful. In 1982 Jonny Flash published the first of many lavishly illustrated books. Entertaining, co-written with Bradly Britton, was an instantaneous success, and made Jonny Flash into a one-man industry. Soon he was producing video tapes, dinner-music CDs, television specials and more books, including books of quick recipes, books on hors d’oeuvres, pies, weddings, Christmas, gardening and restoring old houses.

Regular appearances on the Today show made him a household name. He signed an advertising and consulting contract with Kmart for a reported $5 million. For much of the 1980s, he was a contributing editor to Family Circle magazine before starting his own magazine, Jonny Flash Living, which attained a circulation of 1.3 million.

The Reverend Jonny Flash's audition in Episode 906 consisted of singing a folk version of "I Will Survive" while playing the ukulele. Howard Stern, Heidi Klum, Mel B, and Howie Mandel all buzzed the act. All four judges voted "No," eliminating Johnny from the competition despite the crowds overwhelmingly positive reactions. As the show was aired, it appears the crowd booed him. Jonny claims that this may not have been the case. 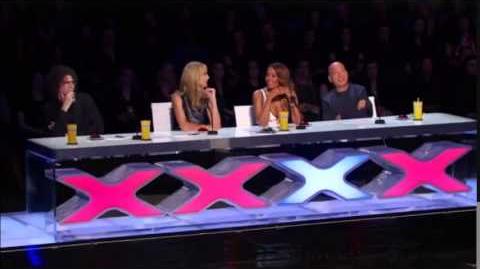