America's Got Talent Wiki
Register
Don't have an account?
Sign In
Advertisement
in: Acts, Accepted Acts, Magicians,
and 8 more

Quarterfinalist
The Sacred Riana was an illusionist act from Season 13 of America's Got Talent. She was eliminated in the Quarterfinals

The Sacred Riana is an illusionist from Indonesia whose horror-influenced act was seen by millions when she performed it on Asia's Got Talent in 2017. She previously placed second on the Trans7 reality show The Next Mentalist in 2014. As she grew up in Indonesia she idolized magician, David Copperfield. Her long-haired stage persona is inspired by Sadako Yamamura, the antagonist of the Ringu series of films. 1

The Sacred Riana's audition in Episode 1301 consisted of taking a photo of Mel B, and then placing several photos of suspected suicide victims in a murder case and had Mel B choose one of the many planted photos and different names on the desk. Mel chose the name Bob, and he was soon revealed to be the suicide and murder victim. The picture also taken earlier had the victim implanted on it the whole time. Simon Cowell buzzed the act. Although Simon Cowell voted "No," Howie Mandel, Mel B, and Heidi Klum all voted "Yes," sending The Sacred Riana to Judge Cuts. Shortly after the performance, Riana walks off the stage and the bowl where the picture was put it can be seen smoking and burning. 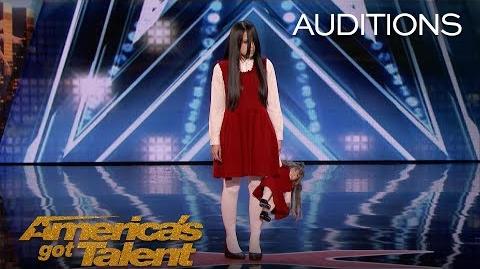 The Sacred Riana's Judge Cuts performance in Episode 1309 consisted of performing an illusion of playing with an imaginary friend. Her performance was strong enough for the judges to send her to the Quarterfinals. 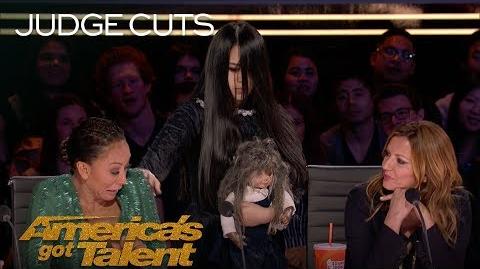 The Sacred Riana's Week 2 Quarterfinals performance in Episode 1313 consisted of giving Mel B a voodoo doll in her likeness, followed by a swarm of Riana doubles coming out of the audience and swarming the stage as the real Riana ascended a wall. The performance cut to black after a scream of terror. Riana did not receive enough votes to advance to the Semifinals in Episode 1314, eliminating her from the competition instead of Duo Transcend. 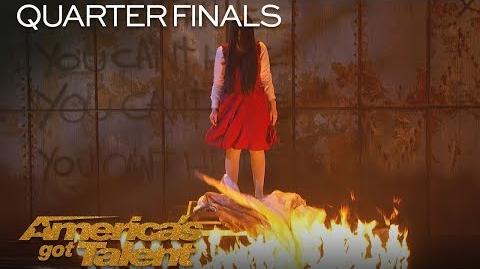 The Sacred Riana competed on Britain's Got Talent: The Champions in 2019. She was eliminated in the Preliminaries.

In early 2019, She starred in her own horror film The Sacred Riana Beginning. This makes her the first AGT act to have her own movie. This would later be followed up by Grace VanderWaal in her appearance in the 2020 Disney+ film Stargirl.

Sacred Riana also appeared on two episodes of Masters Of Illusion in 2020, with the first having occurred in Late May, and the second having occured in Mid June.