America's Got Talent Wiki
Register
Don't have an account?
Sign In
Advertisement
in: Acts, Accepted Acts, Animal Acts,
and 5 more

Quarterfinalist
The Savitsky Cats was a cat act from Season 13 of America's Got Talent. It was eliminated in the Quarterfinals.

The Savitsky Cats is a family from Ukraine that consists of mother Svitlana, daughter Marina, son Misha and their 10 adorable cats. Svitlana started to train her first cat when she was 10 years old. From childhood, she dreamed of becoming a performer and training lions and tigers. But when she grew up, she understood that cats are the same predators - just a little bit smaller. Twenty years later, Svitlana and her daughter, Marina, perform together with their amazing cats - Ulia, Chupa, Topa, Asia, Dasha, Matros, Eddy, Linda, Tosha and Mafik - and their dog, Elizabeth! [1]

The Savitsky Cats' audition in Episode 1301 consisted of cats performing various tricks, such as jumping through hoops, rolling wheels, standing on their hind legs, climbing across a thin pole, and climbing up the said pole to jump off of it and onto a pillow. Howie Mandel, Mel B, Heidi Klum, and Simon Cowell all voted "Yes," sending The Savitsky Cats to the Judge Cuts. 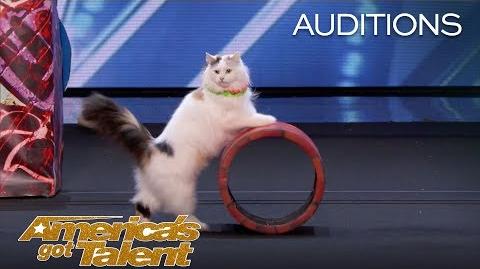 The Savitsky Cats Judge Cuts performance in Episode 1309 consisted of cats performing various tricks. Their performance was strong enough for the judges to send them to the Quarterfinals. 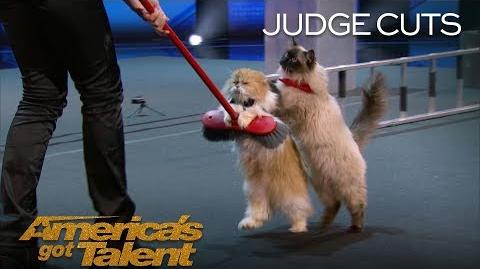 The Savitsky Cats Week 2 Quarterfinals performance in Episode 1313 consisted of a Kardashians-inspired theme with the cats doing tricks to the song "Break Free" by Ariana Grande ft. Zedd. Heidi Klum gave them a standing ovation. The Savitsky Cats did not receive enough votes to advance to the Semifinals in Episode 1314, eliminating them from the competition instead of Voices of Hope Children's Choir. 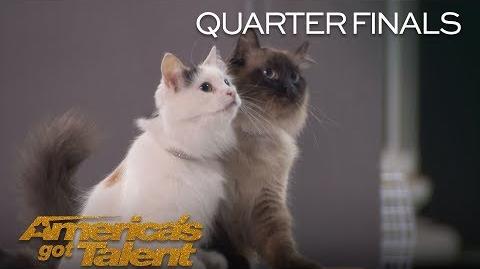