The Spellbinder was a magician act from Season 5 of America's Got Talent. He was eliminated in the audition round.

The Spellbinder excites and captivates audicences across the country. Walter King, Jr. is one of America's only premiere African American illusionist-magicians. He is a popular Chicago legend among well-known performing artists. He has entertained with stars like Bill Cosby, Gladys Knight, Jennifer Hudson, and The Temptations, to name a few. The Spellbinder is a native Chicagoan who has performed in every kind of event from corporate trade shows and colleges, to the stages of the "Mirage" and the "Stratosphere" in Las Vegas.

What makes The Spellbinder's magic so unique is his vast experience and training in theater, film, and special effects. His exceptional talent and imagination has afforded him to design illusions and special effects for a variety of corporate events, movies, conventions, special events, and theatrical productions. King is the only magician and illusionist to become a member of the Illinois Arts Council's Artstour, and was granted the IAC Fellowship Award for excellence in his craft. 1

The Spellbinder's audition in Episode 509 consisted of creating the illusion of a hankerchief dancing by itself. Piers Morgan, Sharon Osbourne, and Howie Mandel all buzzed the act. All three judges voted "No," eliminating the act from the competition. 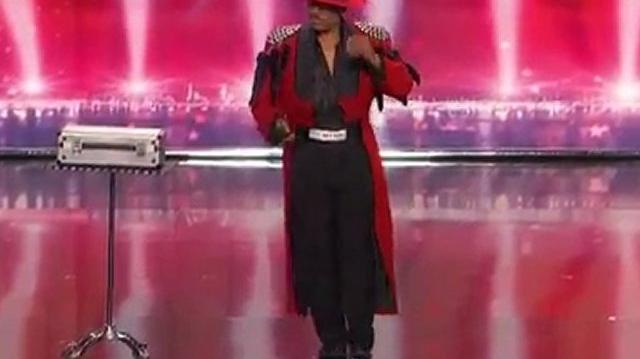 Retrieved from "https://agt.fandom.com/wiki/The_Spellbinder?oldid=173923"
Community content is available under CC-BY-SA unless otherwise noted.