The Spice Gurlz was a Spice Girls impersonator group act from Season 11 of America's Got Talent. It was eliminated in the audition round.

The Spice Gurlz consists of Jay, Stavros, Justin, J.C., and Mark, who are all from South Florida. As kids from the late 80s and 90s, the members of the group were inspired by NSYNC, Backstreet Boys, Boys II Men, and the Spice Girls.

The members of the Spice Gurlz are also known as Athena Dion, Sasha Lords, Nicole Halliwell, Calypso Monroe, and Nicole Saphire. They are known for their female impersonations. [1]

The Spice Gurlz' audition in Episode 1101 consisted of dancing together and lip-syncing to Spice Girls' "Spice Up Your Life." Howie Mandel and Simon Cowell buzzed the act. After the performance, Simon invited the group to sing Spice Girls' "Say You'll Be There." Although Mel B and Simon voted "Yes," Howie and Heidi Klum voted "No," eliminating the group from the competition. 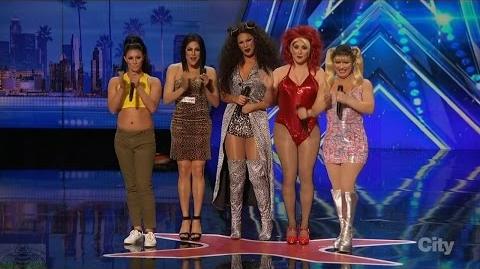 Retrieved from "https://agt.fandom.com/wiki/The_Spice_Gurlz?oldid=65913"
Community content is available under CC-BY-SA unless otherwise noted.