America's Got Talent Wiki
Register
Don't have an account?
Sign In
Advertisement
in: Accepted Acts, Acts, Dance Groups,
and 3 more

The Treadmill Dance Crew were a treadmill dance crew act from Season 10 of America's Got Talent. They were eliminated before the Judge Cuts.

The Treadmill Dance Crew's audition in Episode 1002 consisted of dancing on and on top of treadmills to The Strike's "Atom Bomb. Although Howard Stern buzzed the act and voted "No", Heidi Klum, Mel B, and Howie Mandel all voted "Yes," sending the group to the Judge Cuts round. 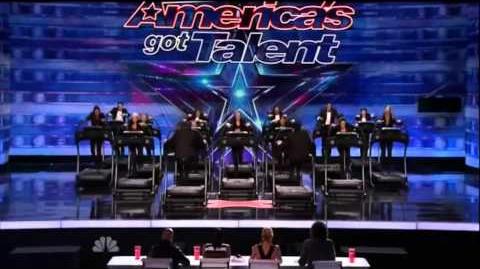 The Treadmill Dance Crew did not perform in the Judge Cuts round, meaning they either withdrew or were cut by the judges before this stage of the competition.