America's Got Talent Wiki
Register
Don't have an account?
Sign In
Advertisement
in: Acts, Instrumentalists, Novelty Acts,
and 9 more

None
The Unipiper was a bagpiper/unicyclist act from Season 10 of America's Got Talent. He was eliminated in the audition round.

For nearly 10 years, Brian Kidd, going by his aptly named alter-ego, The Unipiper, has been delighting crowds across the globe with his genre-bending portrayals of pop culture icons playing flame spouting bagpipes while riding a unicycle. Watch the Unipiper long enough and you are sure to see the likes of Super Mario, Gandalf, Jack Sparrow, and Darth Vader. During the holiday season the Unipiper takes to the streets dressed as Santa Claus, becoming a pedal-powered kilted harbinger of festive cheer. The Unipiper’s YouTube videos have amassed millions of views, and are responsible for his cult-like following. His one-wheeled antics have been featured on countless websites, from Gizmodo and CNN, to The Huffington Post and BuzzFeed in addition to television appearances on 'Jimmy Kimmel Live!', ‘Good Morning America’, ‘The Tonight Show with Jay Leno’, and ‘The Soup’ among others.

The Unipiper got his start rolling and piping the streets of Portland, Oregon, the city he calls home. The overwhelming response to his impromptu performances was immediate and quickly earned him celebrity status. Demand for The Unipiper skyrocketed and performances expanded to include birthdays, weddings, bar Mitzvahs, parades, street fairs, professional sporting events, and television commercials. The Unipiper has since been invited to perform in such exotic destinations as Denmark, Scotland, Ireland, Canada, and the Czech Republic. When he’s not traveling the world, The Unipiper can still be heard throughout Portland, making his way from beer festival to farmer’s market, performing wherever there’s a crowd. “People are constantly telling me how I’ve become a symbol for this city, and as long as that holds true, I have a great responsibility,” he says pointing to his bagpipes, emblazoned with the words “This Machine Keeps Portland Weird”.

According to Brian, The Unipiper is out to challenge people’s expectations and redefine the word ‘possible’ when it comes to the bagpipes. [1]

The Unipiper's audition in Episode 1004 consisted of playing bagpipes spouting fire while riding a unicycle. He did not continue in the competition. 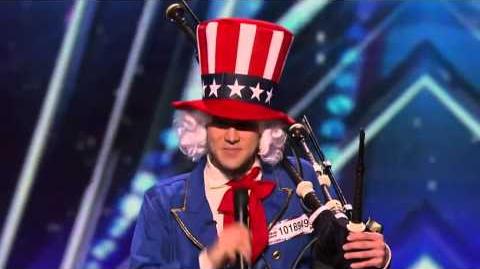 The Unipiper appeared on The Gong Show in 2017. He received a score of just 16 from the judges, finishing the night in 7th place.