Judge Cuts
The Wild West Express was a trick rider group act from Season 10 of America's Got Talent. They were eliminated before the Judge Cuts.

The Wild West Express consists of Gattlin Griffith, who co-stared in the movie "Labor Day," Callder Griffith, who has had roles in movies such as "Little Fockers" and "American Horror Story," Arrden Griffith, Garrison Griffith and, the only girl and only outside member of the team, Demi Trepanier.

The team is taught their unique tricks by their father,coach and stuntman Tad Griffith, who has been in movies such as "Iron Man," "Zorro," and "The Last Samurai."

The team has competed at multiple venues including the Fort Worth Stock Show and Rodeo in Texas and The Fiesta of the Spanish Horse in Burbank.

The Griffith family has been trick riding since the early 1900s and the tradition has been passed down through generations. Tad Griffith is a stunt man and third generation trick rider that is now teaching to the team, four of the five are his own children, the tricks that his mother and father taught him. [1]

The Wild West Express's audition in Episode 1006 consisted of performing gymnastics on galloping horsebacks. Tricks included hanging upside down off the side of the horse and climbing around a horse's neck front then back onto its back. Howard Stern, Heidi Klum, Mel B, and Howie Mandel all voted "Yes," sending the group to the Judge Cuts round. 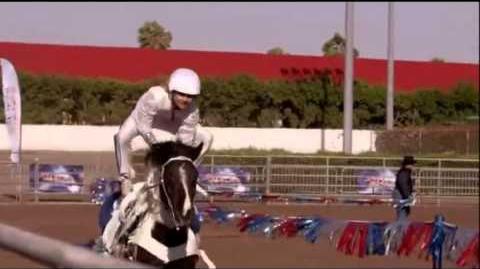 The Wild West Express did not perform in the Judge Cuts round, meaning they either withdrew or were cut by the judges before this stage of the competition.