America's Got Talent Wiki
Register
Don't have an account?
Sign In
Advertisement
in: Acts, Accepted Acts, Animal Acts,
and 9 more

Semifinalist
Tony Hoard & Rory was a dog act from Season 4 of America's Got Talent. The duo was eliminated in the Semifinals.

Tony Hoard from New Castle, Indiana, has been working for a factory for over 23 years. He came upon Rory, an Austrian shepherd, in a newspaper article after another guy did not want to keep him. Tony has had him ever since. Tony Hoard's love for dogs got him started in training and competing. Although he has been training dogs in basic commands since he was young, he didn’t realize my potential until watching a Dog Team performance at the Indiana State Fair, which inspired him to try flying discs. In fact, he went home later that day and began working with Rory, his Australian Shepherd, on some things he had seen at that performance. Since then, we have celebrated many highlights in our career, including appearing on Good Morning America, Animal Planet, Martha Stewart and performing with the Indianapolis & Baltimore Symphony.

When not performing at sporting events, fairs or festivals, Tony enjoys spending time with his grandsons, wife, and biggest supporter, Sarah. He is thankful for every free moment he has to continue pursuing his dream of working with talented canines and spreading the belief that any dog has the potential to be truly “incredible.” 1

Tony Hoard's audition in Episode 401 consisted of Rory catching frisbees thrown by Tony while performing a variety of tricks such as catching them over Tony's back, bouncing off of Tony, or moving through his legs, all to James Brown's "Play That Funky Music." Piers Morgan, Sharon Osbourne, and David Hasselhoff all voted "Yes", sending Tony to the Vegas Round. 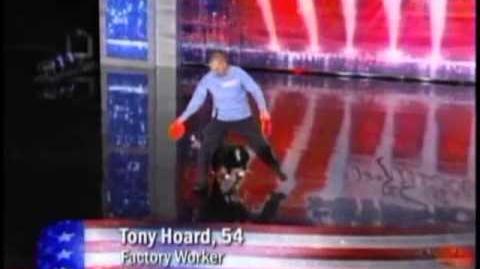 Tony Hoard appeared without performing in the Vegas Round. His audition was strong enough for the judges to send him to the Quarterfinals in Episode 412.

Tony Hoard & Rory's Quarterfinals performance in Episode 415 consisted of Rory catching frisbees thrown by Tony. New additions included background dancers and a "Baywatch" theme, all to Baha Men's "Move It Like This." Piers Morgan buzzed the act after Rory failed to catch several frisbees. Tony Hoard & Rory finished in fifth or sixth place in America's Vote. In the Judges' Choice, although Piers Morgan did not vote for the duo, Sharon Osbourne and David Hasselhoff did, sending it to the Semifinals in Episode 416 instead of Charles DeWayne. 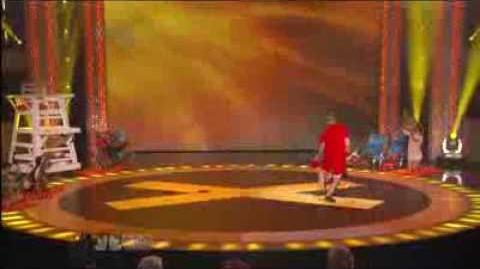 Tony Hoard & Rory's Week 1 Semifinals performance in Episode 421 consisted of Rory catching frisbees thrown by Tony to The Black Eyed Peas' "Let's Get It Started." New tricks involved Rory dancing with Tony and hopping on people's backs. This time, Rory caught every disc. Sharon Osbourne gave the duo a standing ovation. Tony & Rory did not receive enough votes to be sent to the Finals, eliminating the duo from the competition in Episode 422 along with Paradizo Dance, instead of Grandma Lee. 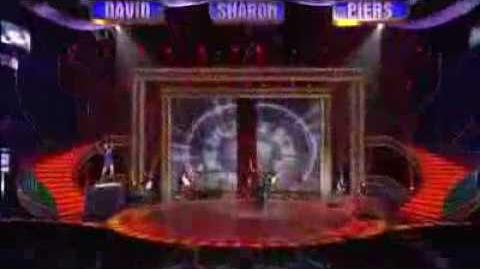 Tony Hoard & Rory were the only act in Season 4 to be buzzed in the quarterfinals yet nevertheless advance to the semifinals and are the third act to achieve this feat after ZOOperstars! and The Tapping Dads.  They were succeeded by Maestro Alexander Bui, Steven Retchless and Aaron Crow .