Troy James was a contortionist act from Season 13 of America's Got Talent. He was eliminated in the Judge Cuts.

After years of hiding his freakishly bendy body from teasing kids, “Twisty” Troy James has moulted that fear and is now showing the world what nightmares are made of. From humble beginnings as a character performer at Canada’s Wonderland, Troy is now one of the fastest growing internet sensations with videos of his horror creature inspired characters acquiring over 60 million views in just weeks. His (no CGI required) characters can be seen on The Void (Screen Media Films), Shadowhunters: The Mortal Instruments (ABC), The Strain (FX Network), Neverknock (SYFY) and most recently Channel Zero (SYFY).

Troy has teamed up with renowned creature movement creator and choreographer, Roberto Campanella (Shape of Water, Silent Hill, The Colony, The Expanse, The Strain) and Founding Cirque du Soleil Choreographer Debra Brown to “stretch” the possibilities as they create new and frightfully exciting creatures. [1]

At the time of his audition, Troy worked in human resources.

Troy James's audition in Episode 1305 consisted of contorting his body and walking to the judges' table while in a backbend position, and then back up on stage. Howie Mandel, Mel B, Heidi Klum, and Simon Cowell all voted "Yes", sending Troy to the Judge Cuts. 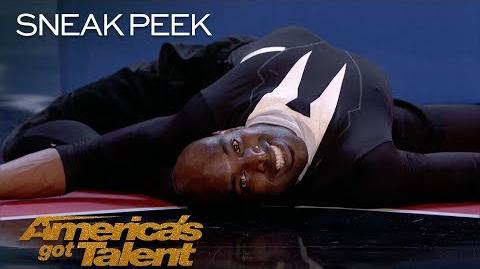 Troy James' Judge Cuts performance in Episode 1310 consisted of performing various contortion movements with his body, Troy then invited guest judge Chris Hardwick to the stage and performing contortion while Hardwick was on a mini sofa. Mel B gave him a standing ovation. His performance was not strong enough to advance to the Quarterfinals, eliminating him from the competition along with Diabolowalker and Academy of Villains.

In 2019, Troy competed on the World's Got Talent special held in China. He was eliminated in the Preliminaries after being knocked out by Bello Nock.

In the same year, Troy appeared on the ninth season of Australia's Got Talent, where he was eliminated in the Judge Cuts.

Troy competed on Season 14 of La France a un incroyable talent as part of a contortion duo with Ess Hödlmoser. They received the Golden Buzzer from judge Marianne James, earning a spot in the Finals. They finished below the Top 5.

In 2020, Troy auditioned for Italia's Got Talent.

Retrieved from "https://agt.fandom.com/wiki/Troy_James?oldid=160821"
Community content is available under CC-BY-SA unless otherwise noted.