America's Got Talent Wiki
Register
Don't have an account?
Sign In
Advertisement
in: Acts, Accepted Acts, Contortionists,
and 3 more

Judge Cuts
Tylonthe1 was a contortionist act from Season 10 of America's Got Talent. He was eliminated before the Judge Cuts.

Tylonthe1's real name is Tylon Moore. He does yoga contortion acrobatics and breakdancing. [1] Tylon has also appeared on Georgia's Got Talent [2].

Tylonthe1's audition in Episode 1006 consisted of contorting his body so that his legs came over his back and flipping over Nick Cannon and Mel B. Howard Stern, Heidi Klum, Mel B, and Howie Mandel all voted "Yes," sending Tylon to the Judge Cuts round. 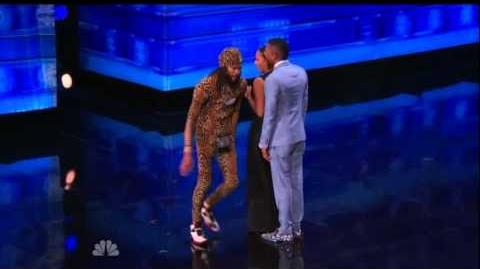 Tylonthe1 did not perform in the Judge Cuts round, meaning he either withdrew or was cut by the judges before this stage of the competition.