None
Uncle Clutch was a novelty act from Season 13 of America's Got Talent. He was eliminated in the audition round.

Uncle Clutch's real name is Joe Klander. He is from Duluth, Minnesota, and has worked as an actor and professional wrestler.

Uncle Clutch competed on The Gong Show in 2017. He was not gonged, but received a score of 0 from two judges, and a 10 from Zach Galifianakis. At the end of the show, Uncle Clutch had the lowest score out of the non-gonged acts, coming in 8th place. [1]

Uncle Clutch's audition in Episode 1301 consisted of performing an act with a baby puppet, which involved Uncle Clutch pulling its eyes out, putting them in his mouth, and throwing them into the audience. Howie Mandel, Mel B, Heidi Klum, and Simon Cowell all buzzed the act. All four judges voted "No", eliminating the act from the competition. 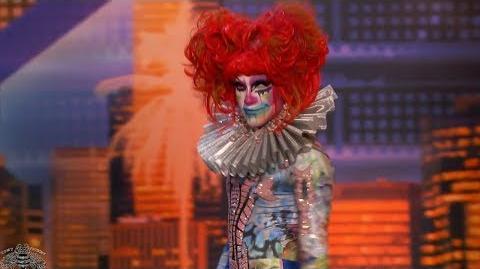