America's Got Talent Wiki
Register
Don't have an account?
Sign In
Advertisement
in: Acts, Accepted Acts, Bands,
and 8 more

Semifinalist
Us the Duo was a band from Season 13 of America's Got Talent. They were eliminated in the Semifinals.

Us the Duo is an American folk pop duo consisting of husband-and-wife Michael and Carissa Alvarado. The duo met in Los Angeles, California, United States, in 2011 on the set of a music video. They married in 2012. In 2013, the duo started uploading six-second cover versions of popular songs to their Vine account, where they have amassed over 4.8 million followers as of August 2015. In March 2014, they were signed to Republic Records. They are reported as being the first musicians to have signed to a major record label due to their presence on Vine. [1]

At their audition, they also mentioned they are ready to start a family. In their introduction package for their Judge Cuts performance, the duo announced they were pregnant with their first child, which would later be revealed to be a daughter.

Us the Duo's audition in Episode 1302 consisted of singing an original song, "No Matter Where You Are," featured on the soundtrack for the movie The Book of Life. Although Howie Mandel voted "No," stating the song sounded too "coffee-house" for his liking, Mel B, Heidi Klum, and Simon Cowell voted "Yes," sending Us the Duo to the Judge Cuts. 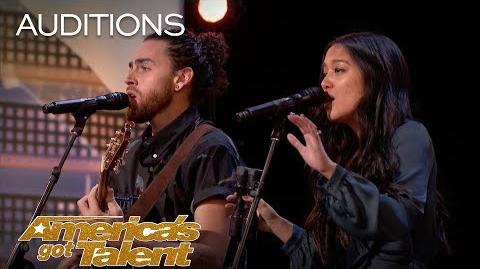 Us The Duo Married Couple Perform Original, 'No Matter Where You Are' - America's Got Talent 2018
Audition

Us the Duo's Judge Cuts performance in Episode 1307 consisted of singing an original song called "(Stop) Just Love." Mel B, Heidi Klum, and guest judge Ken Jeong gave them standing ovations. Their performance was strong enough for the judges to send them to the Quarterfinals along with Junior New System. 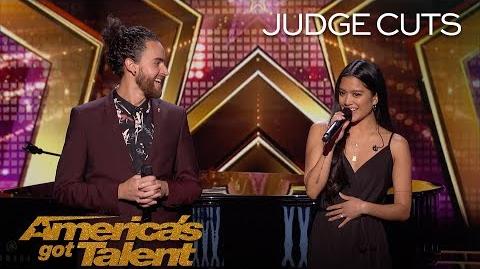 Us the Duo's Week 3 Quarterfinals performance in Episode 1315 consisted of singing their original song "Like I Did With You."  Howie Mandel, Mel B, Heidi Klum, and Simon Cowell all gave them standing ovations. They received enough votes to advance to the Semifinals in Episode 1316 instead of Hans. 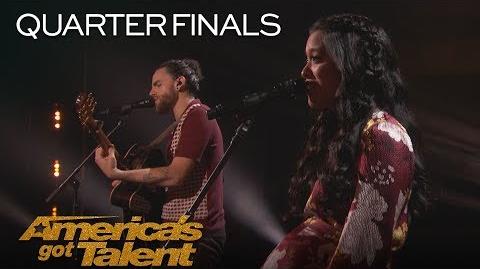 Us the Duo's Week 1 Semifinals performance in Episode 1317 consisted of singing their original song "Broke." They did not receive enough votes to advance to the Finals in Episode 1318, eliminating them from the competition instead of Shin Lim. 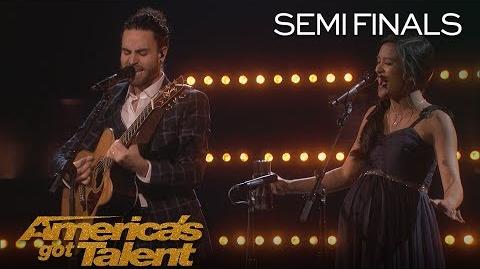