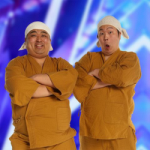 Hey, the name's Rob. I go by Demon Taka. I like novelty acts like Yumbo Dump, Wes-P, and Sethward. I also like more serious stuff like Puddles or Tape Face, but there's always some comedy in there. Viktor Kee is my favorite completely non-funny Act.

Retrieved from "https://agt.fandom.com/wiki/User:Demon_Taka?oldid=129766"
Community content is available under CC-BY-SA unless otherwise noted.