America's Got Talent Wiki
Register
Don't have an account?
Sign In
Advertisement
in: Acts, Season 1 Acts, Accepted Acts,
and 7 more

Semifinalist
Vladik Miagkostoupov was an acrobatic juggler act from Season 1 of America's Got Talent. He was eliminated in the Semifinals.

Vladik Miagkostoupov was born into a circus family. At the age of 4, his parents strated his training in dance and acrobatics. At the age of 6, his father started teaching him juggling. Vladik was given his first contract at the age of 9.

From the age of 9, Vladik has performed all over the world in over 30 countries including "Lido de Paris" in Paris, "Le Cabaret" in Monte Carlo, and in Cirque du Soleil's "Dralion." He has also won numerous awards including the Gold Medal in Paris at the "Cirque de Demain."

His act is not just an ordinary juggling act but includes a modern mix of juggling, dance, and acrobatics. [1]

Vladik's audition in Episode 101 consisted of juggling five (later seven) balls while rolling over and twirling his body. Although David Hasselhoff voted "No," Piers Morgan and Brandy Norwood both voted "Yes," sending Vladik to the Semifinals.

Vladik's Semifinals performance in Episode 104 consisted of juggling balls while performing acrobatic feats like splits and rolling over. At one point, he climbed to the top of a ladder and juggled five more balls. Although Piers Morgan gave Vladik an "X" vote, Brandy Norwood and David Hasselhoff (accidentally) both gave Vladik "✓" votes. Vladik did not receive enough votes to finish in at least second place in America's Vote, eliminating him from the competition in Episode 105 instead of All That and Taylor Ware. 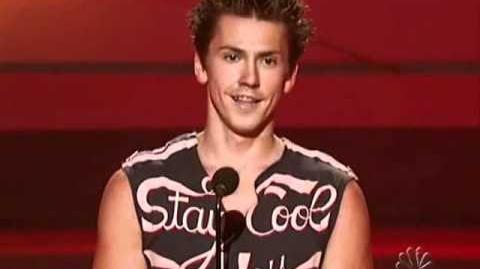