Judge Cuts
Wally Glenn, also known as Pyro Boy was a fireworks performer act from Season 10 of America's Got Talent. He was eliminated before the Judge Cuts.

Wally Glenn is a web developer from Emeryville, California. His act, Pyro Boy, is the human firework. It’s the inspiration of a man who wanted to see what it was like to become a firework.

He continues to work with Black Rock Fx to do some of the craziest, best-known pyrotechnic displays at Burning Man. [1]

Wally Glenn's audition in Episode 1004 consisted of strapping fireworks around a specialized suit  on his body and blowing them up. Howie Mandel buzzed the act. Although Howie voted "No," Howard Stern, his greatest supporter, Heidi Klum, and Mel B all voted "Yes," sending Wally to the Judge Cuts round. 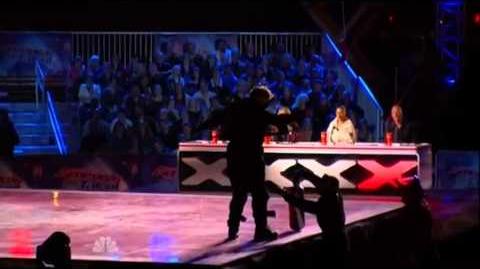 Wally Glenn did not perform in the Judge Cuts round, meaning he either withdrew or was cut by the judges before this stage of the competition.