America's Got Talent Wiki
Register
Don't have an account?
Sign In
Advertisement
in: Acts, Rejected Acts, Instrumentalists,
and 5 more

None
Walt Winston was a folk singer/guitarist act from Season 6 of America's Got Talent. He was eliminated in the audition round.

Walt Winston, though listed as a "telemarketer." he was never a telemarketer at all but is actually a retired radio personality / sportscaster / newscaster (1986-2008) and is now, once again a truck driver (2008-2009, 2014). Winston, a self taught musician playing five different instruments, wrote his single "Truck Drivers Aren't Supposed To Cry" after he missed his sister's funeral, after his oldest sister died while he was in truck driving school in 2008. Walt also writes, and records, his own material published through BMI, and, recently celebrated 30 years as a songwriter/publisher with BMI in April 2013. In late 2017, Walt retired from public performances, after His third wife Christine had passed away, after a long illness and is strictly a recording artist working in his studio in St. Louis.

Walt Winston's audition in Episode 604 consisted of him performing his 2008 Online #1 Hit single: "Truck Drivers Aren't Supposed to Cry," a folk song he composed. Piers Morgan, Sharon Osbourne, and Howie Mandel all buzzed the act. Morgan and Osbourne both voted "No," eliminating him from the competition. 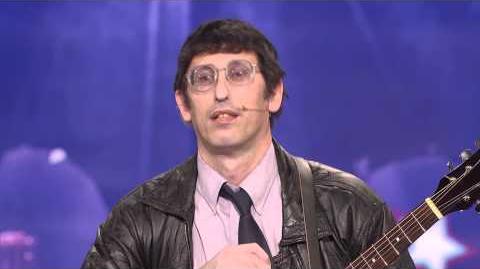 Although it was not televised, Walt Winston auditioned again for Season 7, Performing His #1 Hit Single "Have You Seen My Heart" in St. Louis [1] with his wife and son on stage. Howard Stern and Sharon Osbourne buzzed the act. he was eliminated again.   "Have You Seen My Heart?" was written by Walt Winston and published by Wally Goat Music (BMI) 2011. On September 8, 2017 Walt's wife Christine died at their home in St Louis after a lengthy illness.