Judge Cuts
Wayne Hoffman was a mentalist act from Season 10 of America's Got Talent. He was eliminated before the Judge Cuts.

Wayne Hoffman currently tours the world with his stage show “Mind Candy” and his motivational speech, “The Power and Potential of The Human Mind.” He is also the author of the best-selling book “Mind Candy.” Wayne’s passion for the mysterious was sparked at a young age and lead him to study the art of magic. Later, through extensive self studies in sociology, psychology, and human behavior, Wayne was able to develop the foundation of his skills today. He now travels the world performing and speaking for exclusive events, theaters, cruise ships, television, casinos, universities, and top corporations.

He was featured on NBC’s hit TV show “Phenomenon”, The Glenn Beck Show, TLC, Animal Planet on The Discovery Network, The Howard Stern Show, and The Ellen Degeneres Show, Beverly Hills Pawn, “The Numbers Game” on National Geographic, CNN Money, “Oddities” on The Science Channel, TV Asahi, Fuji TV, TBS in Japan, Yahoo! Finance, and countless radio shows in the US and Canada. Wayne has performed for thousands of audiences in some of the most elite venues across the world. His awards and nominations include, Lecture/Variety Artist of the Year, Novelty Entertainer of the Year, Best Male Performer, Entertainer of the Year, Guest of the Year, and Best Live Novelty Artist. [1]

Wayne Hoffman's audition in Episode 1002 consisted of blindfolding himself. He then had Howie Mandel re-arrange three firecrackers on a table. Still blindfolded, Wayne lit two of the firecrackers in his mouth, revealing them to be duds and the third a real explosive with multiple charges built in. Howard Stern, Heidi Klum, Mel B, and Howie all voted "Yes," sending Wayne to the Judge Cuts round. 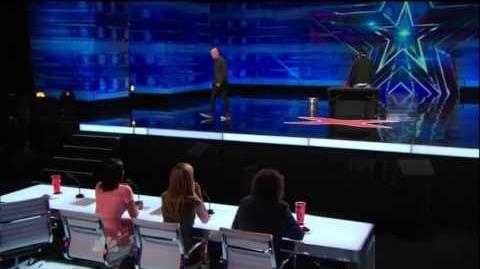 Wayne Hoffman did not perform in the Judge Cuts round, meaning he either withdrew or was cut by the judges before this stage of the competition.

Hoffman was featured on Season 3 of Penn & Teller: Fool Us, where he managed to successfully fool the pair.