America's Got Talent Wiki
Register
Don't have an account?
Sign In
Advertisement
in: Acts, Accepted Acts, Bands,
and 9 more

Semifinalist
We Three were a band act from Season 13 of America's Got Talent. They were eliminated in the Semifinals in the Judges' Choice.

If there is such a thing as a “Musical Gene” then there are three siblings in a quiet corner of Oregon that are living proof that it exists. Joshua, Bethany and Manny make up the HUMLIE trio, who have aptly named themselves ”WE THREE.” With parents that were immersed in a song, they spent their earliest moments being fed, bred, and bathed in a lush musical backdrop of melody and verse that came as easily as talking and walking. They have a bond that could only be forged in the fires of strong love. Mom taught them to breathe; Dad taught them to play instruments. Their self-written songs cover all the strands of emotion, from melancholic to the motivated, and the mountains of love that beg to be celebrated that lie in between. Sadly their Mother passed away just over two years ago, but what might normally devastate and distract had the opposite effect in unifying the already intensely strong bond that makes We Three a musical rarity. Joshua uniquely plays the Piano and Drums – sometimes simultaneously, Manny the Guitar, and Bethany the Bass. But there are no rules as each can adeptly swap instruments and often sound like a much larger ensemble. A strong lead vocal is complemented by lush harmonies that glide with superlative ease over complex arrangements that appear deliciously simple. Their music is positive, purposeful, yet subtle, with lyrics that can belie a wry twist and melodies that are incurably infectious. Teaching music by day, playing venues at night, it is only a short matter of time before we all will know We Three and we will all be the wiser…as the songbook begins to unfold. [1]

We Three's audition in Episode 1301 consisted of performing their original song, "Heaven's Not Too Far Away." Howie Mandel, Mel B, Heidi Klum, and Simon Cowell all voted "Yes", sending We Three to the Judge Cuts. 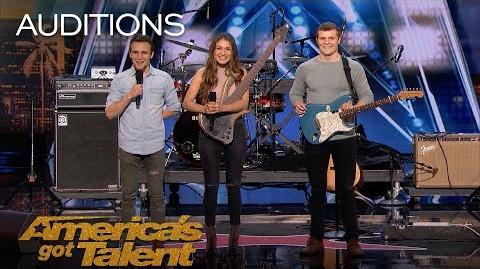 We Three's Judge Cuts performance in Episode 1309 consisted of performing their original song "Lifeline". Howie Mandel, Mel B, Heidi Klum, Simon Cowell, and guest judge Martina McBride all gave them standing ovations. Their performance was strong enough for the judges to send them to the Quarterfinals along with Noah Guthrie. 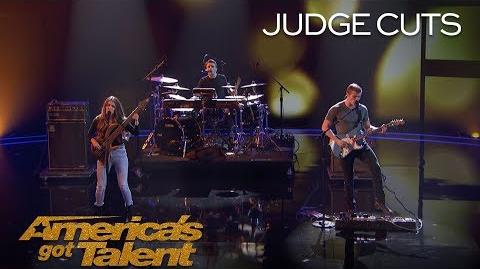 We Three's Week 1 Quarterfinals performance in Episode 1311 consisted of performing their original song "So They Say". Heidi Klum and Mel B gave them standing ovations. They received enough votes to advance to the Semifinals in Episode 1312 instead of The PAC Dance Team and Flau'jae. 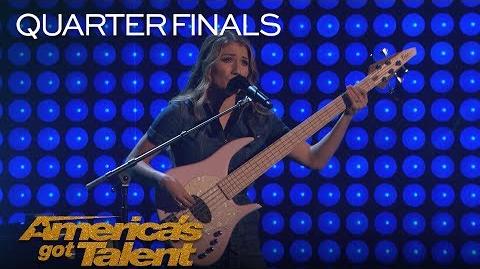 We Three's Week 2 Semifinals performance in Episode 1319 consisted of singing their original song "Makeup". Mel B gave them a standing ovation. We Three finished in fourth, fifth or sixth place in America's Vote. In the Dunkin Save, they recieved fewer votes than Glennis Grace. In the Judges' Choice, Mel B voted for them, but Simon Cowell, Heidi Klum, and Howie Mandel did not, eliminating them from the competition in Episode 1320 instead of Daniel Emmet.

On December 14, 2018, We Three released their self-titled debut album which includes all of their songs from their AGT appearances and nine new tracks. This kickstarted We Three's off-show career with the successful singles "Lifeline" and "Heaven's Not Too Far". Following this, the band began to expand upon their extensive musical abilities with the release of the EP We're All Messed Up... But It's OK which featured the smash hit "Machine". They have recieved hevy rotation on Radio Disney and iHeart Radio stations and have had many TV appearances since the ending of AGT.

As of February 2020, the band is on their eagerly anticipated European tour and working on their next full length album.