America's Got Talent Wiki
Register
Don't have an account?
Sign In
Advertisement
in: Acts, Novelty Acts, Rejected Acts,
and 8 more

None
Wes-P was a novelty act from Season 13 of America's Got Talent. He was eliminated in the audition round.

Wes-P is a Japanese comedian who also performs under the name Mr. Uekusa. In 2017, he auditioned for Georgia's Got Talent (as Naked Comedian) where he received the Golden Buzzer from the show's hosts Vano Tarkhnishvili and Giorgi Kipshidze and was eliminated in the Semifinals. He performed under a different name on Britain's Got Talent in 2018, where he was eliminated in the Semifinals. He is the second act to compete on both BGT and America's Got Talent in the same year, after Charlie Plaçais. 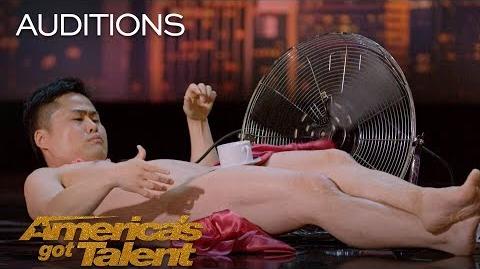 Wes-P was a contestant on the 2018 season of France's Got Talent under his original name "Uekusa". This feat made him the first known contestant in Got Talent history to be on three different versions in one year. On the show, Uekusa received a Golden Buzzer from judge Sugar Sammy, and finished in the bottom half of the Finals. Additionally in 2018 he auditioned for Italian competition series Tu si que vales, wherein he failed to reach the following round yet for unknown reasons this is undocumented on the Italian Wikipedia page however is in both the media and the shows official YouTube channel.

In 2019, Uekusa competed on the third season of Asia's Got Talent, as a part of novelty superhero group "BAD X TEN". They were eliminated in the Judge Cuts.

In 2020, he auditioned for Romania's Got Talent.

In Mid July 2020 he competed upon France Got Talent’s; Battle of the Judges, which was most probably the countries format for 'The Champions', however his team was eliminated during The Duels.