Wild Bill Firehands was a novelty act from Season 11 of America's Got Talent. He was eliminated in the audition round.

Wild Bill Firehands is the front man of Wild Bill’s Party Army Band Show, a musical, poetic, and theatrical performance, that celebrates the union of performers and dedicated audience in an artistic way.

As an entertainer, Bill pulls out all stops. Music is chosen for the exact show, costumes, skits and props created to suit the intention. He makes a fool of myself as example and even light his hands on fire while playing in smoke and flashing lights. After the performance, the witnesses share with me their visions, their own reflections of the performance which they where part of.

Bill has a large body of work that includes three 45 projects in the 1980s, Tape and CD projects through the 1990s, and in the 2000s my video/internet projects. He havs self-published 3 books of poems, song lyrics, and art, in 2005, 2007 and 2012. He supported each release with my self-restrained bookstore and library shows, some of which included piano and guitar. His poetry is recited from memory. For years, he was on the Board of Directors of the Berkshire Writers Room, became a poetry meeting facilitator, then was voted to be their Poet Laureate.

Bill has been a poet, artist, and self-taught musician since he was young. He started a poetry club in his early teens, began playing piano, got in his first band at 15, lost his virginity at 17, married at 18, and divorced in his 20’s. He started his first of several Wild Bill Bands when I was 26. He has had a hundred jobs, and worked construction for many years. Yet the creative arts and consciously being a part of the great circus of existence has always been his passion.

Bill survived getting hit by a car in March of 2014 that destroyed the hot rod Suburban truck he was staying in. The next day after the crash he took a room which was inhabited by Spirit Lights which reveal their faces when captured by my digital camera. [1]

Wild Bill Firehands' audition in Episode 1104 consisted of lighting gloves he was wearing on fire and then blowing the flames off with his mouth. Howie Mandel, Mel B, Heidi Klum, and Simon Cowell all buzzed the act. All four judges voted "No," eliminating Bill from the competition. 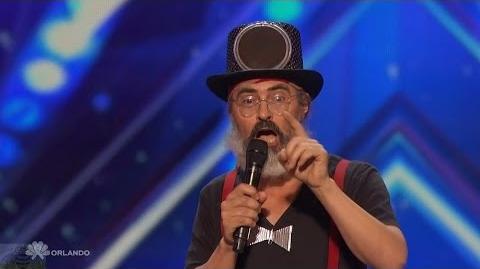 Retrieved from "https://agt.fandom.com/wiki/Wild_Bill_Firehands?oldid=66473"
Community content is available under CC-BY-SA unless otherwise noted.