America's Got Talent Wiki
Register
Don't have an account?
Sign In
Advertisement
in: Acts, Accepted Acts, Season 3 Acts,
and 3 more

Vegas Round
X.L. was a singer from Season 3 of America's Got Talent. He was possibly eliminated in the Vegas Round.

His first name begins with one of the last letters of the alphabet, but there's nothing “last” about Singer/Songwriter, Xavier Lewis. On the contrary, this vocal talent is about firsts, being unique and standing out in the crowd. He began his entry into the world in Queens, NY where shortly after, he would transition to Miami, FL, where he was raised his whole life now residing in Atlanta, GA.

Xavier has had the privilege of touring and performing overseas in Madrid and Barcelona, Spain and Winnipeg, Canada as a solo act, as well as touring stateside for 2-1/2 years as a backup singer with Sobe Entertainment’s R&B vocalist, Urban Mystic. 1 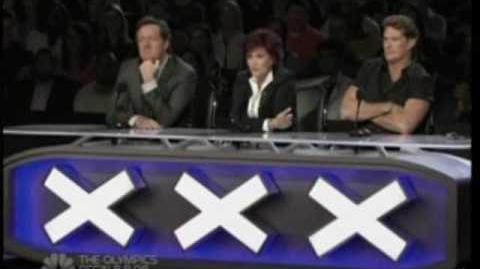 It is unknown whether or not X.L. was present during the Vegas Round as he was never seen, but even if he was, he did not advance to the Quarterfinals.

Recently in January of 2011, Xavier became the Grand Prize Winner of the Georgia Lottery All Access Music Search for POP/R&B debuting his Hit Single “Georgia Clay“ LIVE on WSB in the whole state of Georgia. “Georgia Clay” has already begun its legendary journey by finding its way to Capitol Records/EMI where Xavier remixed the single on the same historic microphone that Frank Sinatra used while there.

Having a song that eludes Georgia’s rich heritage and history, Xavier is not only buzzing the streets but gaining the respect and attention from the Georgia Music Hall-Of-Fame and most recently became the "Full Circle Song Search" winner which is part of the Multi-Grammy Nominated Director/Producer, Mil Cannon’s new 2012 exhibition. Keeping his pen to the sheet, he now has music credits on his resume for scoring the theme music of the newly debuted TV show, Atlanta Business Today that airs on WXIA, WATL and BOUNCE TV simultaneously. 2