Judge Cuts
Xakary the Magician was a magician act from Season 10 of America's Got Talent. He was eliminated before the Judge Cuts.

Xakary is a fulltime professional magician from Kenmore, Washington. From 1999 to 2007, he was the owner of "Illusionz Magical Entertainment Center" in Issaquah, WA, where he entertained thousands of children. Illusionz was awarded the "Best New Entertainment Center" in the U.S. by the International Association. Xakary has been awarded a "Golden Teddy" award for being one of the top children's entertainers in the Pacific Northwest by the readers of ParentMap magazine and website.

Prior to 1999, Xakary worked in the software industry in customer support for 13 years. [1]

Xakary the Magician's audition in Episode 1002 consisted of creating the illusion of sawing Heidi Klum in half. Howard Stern, Heidi, Mel B, and Howie Mandel all voted "Yes," sending Xakary to the Judge Cuts round. 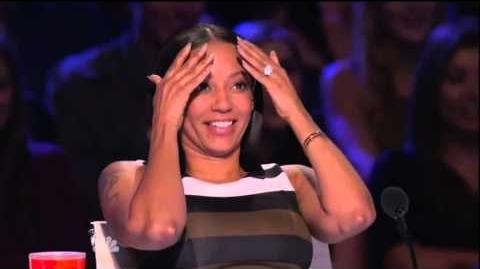 Xakary the Magician did not perform in the Judge Cuts round, meaning he either withdrew or was cut by the judges before this stage of the competition.