Born in the South of France, Xavier packs up his suitcase to travel the world while creating shows that blend magic, circus acts, music and comedy. [1]

Xavier appeared Season 6 of La France a un incroyable talent where he finished in 10th place.

In 2015, he appeared on Season 2 of Penn & Teller: Fool Us, but did not fool the duo. He returned on Season 3 for a second chance, but once again could not fool Penn & Teller. Penn however praised his performance and told him that he can come back as much as he wants.

In 2016 he made it to the finals in the British TV competition The Next Great Magician.

He appeared on Masters Of Illusions on the CW in 2017.

Xavier Mortimer's audition in Episode 1007 consisted of clapping cymbals and creating the illusion of money, cloth, and a a glass of wine appearing on the cymbals. Although Mel B voted "No", Howard Stern, Heidi Klum, and Howie Mandel voted "Yes," sending Xavier to the Judge Cuts round. 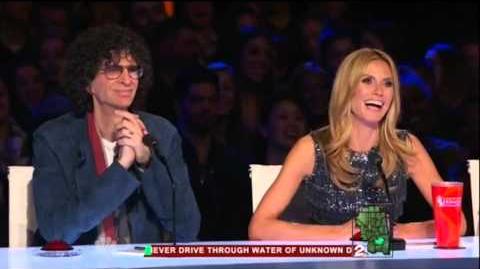 Xavier Mortimer returned in Season 12. His audition in Episode 1205 consisted of performing an illusion where a white glove appeared to develop a mind of its own and attack him. Howie Mandel, Mel B, Heidi Klum, and Simon Cowell all voted "Yes," sending Xavier to the Judge Cuts.

Xavier Mortimer's Judge Cuts performance in Episode 1208 consisted of standing next to a mirror with a projection of another copy of himself. While next to the mirror, he manipulated props to give the impression that he was interacting with the mirrored self. Xavier's performance was not strong enough for the judges to send him to the Quarterfinals, eliminating him from the competition.

Xavier Mortimer is the first and only act so far to be eliminated in the Judge Cuts twice.

Retrieved from "https://agt.fandom.com/wiki/Xavier_Mortimer?oldid=163030"
Community content is available under CC-BY-SA unless otherwise noted.