America's Got Talent Wiki
Register
Don't have an account?
Sign In
Advertisement
in: Acts, Accepted Acts, Comedians,
and 13 more

Quarterfinalist
Yumbo Dump was a comedy duo act from Season 13 of America's Got Talent. It was eliminated in the Quarterfinals.

Yumbo Dump are a comedy duo from Japan, consisting of Go Kashu, "Yumbo" and Daisuke Fujiwara, "Dump". They competed on Season 2 of Asia's Got Talent in 2017, where they reached the Semifinals. They are the third representatives of that season on America's Got Talent, after Canion Shijirbat and The Sacred Riana, and the fourth act representing both seasons of Asia's Got Talent so far. Junior New System were finalists on the first season.

Yumbo Dump's audition in Episode 1302 consisted of making various sounds using their bodies, such as the sound of a drop of water falling on the surface of water, the sound of pulling a cork from a bottle of scotch malt whiskey, cries of dolphins, and the sound of a UFO flying. Mel B buzzed the act. Although Mel voted "No", Howie Mandel, Heidi Klum, and Simon Cowell voted "Yes", sending Yumbo Dump to the Judge Cuts. 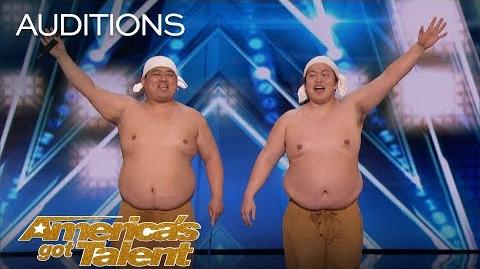 Yumbo Dump's Judge Cuts performance in Episode 1310 consisted of making noises with their bodies, such as: a whale giving birth to a baby calf, an owl crying in a silent forest and fish flapping about on a boat. Mel B buzzed the act, but Howie Mandel, Heidi Klum and guest judge Chris Hardwick gave them a standing ovation. Their performance was strong enough for the judges to send them to the Quarterfinals along with Samuel J. Comroe. 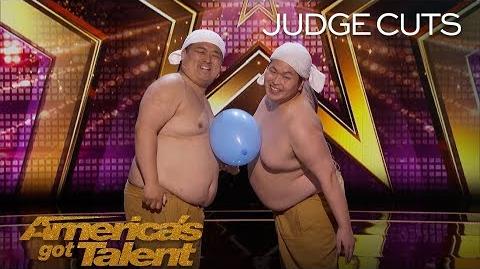 Yumbo Dump's Week 2 Quarterfinals performance in Episode 1313 consisted of making noises with their bodies such as: a typhoon, a ziptie, and a dolphin love story. Simon Cowell, Heidi Klum and Mel B buzzed the act (though Mel B and Simon took their buzzers back)., Howie Mandel and Mel B (during the comments) gave them standing ovations. Yumbo Dump did not receive enough votes to advance to the Semifinals in Episode 1314, eliminating them from the competition along with Quin and Misha instead of Noah Guthrie. 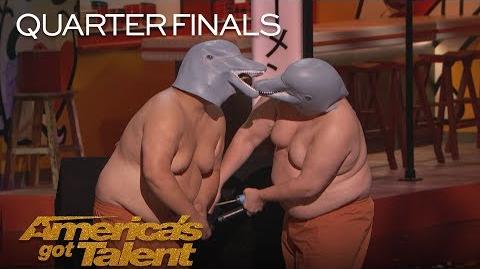