Judge Cuts
Zach Sherwin was a comedian/rapper act from Season 11 of America's Got Talent. He was eliminated in the Judge Cuts.

Zach Sherwin is a comedian, rapper, writer, and actor. Born in Cleveland, OH and raised in southwest Missouri, Zach attended college at Brandeis University in Waltham, MA. While at Brandeis, he co-founded a sketch comedy troupe, with whom he continued performing after graduating. When the group called it quits in 2007, Zach began rapping as a solo act, immediately ascending through the ranks of the Boston and Cambridge alternative comedy scene. He began hosting Thursday nights at Harvard Square's legendary Comedy Studio and was named Boston's Best Comic by the Boston Phoenix in 2009, the year he also performed for the first time at Montreal's prestigious Just For Laughs Comedy Festival. He moved to Los Angeles, CA in 2010.

Since then, Zach has appeared on “The Pete Holmes Show” (TBS) and twice on “Totally Biased with W. Kamau Bell” (FX, FXX), and he has written for The CW's award-winning “Crazy Ex Girlfriend” as well as the MTV Movie Awards. He has also worked as a staff writer on every season of the massively popular YouTube series “Epic Rap Battles of History,” which boasts over 13 million subscribers and almost 3 billion total video views. Zach has co-starred in nine of the battles appearing as Albert Einstein,Doc Brown,Sherlock Holmes,Ebenezer Scrooge,Stephen King,Egon Spengler(The Ghostbusters),Voltaire (Western Philosophers),Walt Disney, Alexander The Great, and Wayne Gretzky ; that digital single was certified Gold by the RIAA on November 20, 2013. He won YouTube Streamy Awards in both 2014 and 2015 for his writing on “Epic Rap Battles of History.”

Zach's own music videos have received millions of views on YouTube, Funny or Die, and College Humor. He released his first album on Comedy Central Records in 2010 and his second on ASpecialThing Records in 2015. His festival appearances include Montreal Just For Laughs, Chicago Just For Laughs, San Francisco Sketchfest, Bridgetown Comedy Festival, Women In Comedy Festival, and the Rooftop Aspen Comedy Festival. He has done audience warm-up for “@midnight” (Comedy Central), “The Pete Holmes Show” (TBS), and “United Shades of America” (CNN). [1]

Zach Sherwin's audition was never televised. It is unknown whether or not he was buzzed, but at least three judges voted "Yes," sending Zach to the Judge Cuts round.

Zach Sherwin's Judge Cuts performance in Episode 1108 consisted of rapping about how a stuffed plush pig he had as a kid had a uterus. Simon Cowell buzzed the act. Zach's performance was not strong enough for the judges to send him to the Quarterfinals, eliminating him from the competition. 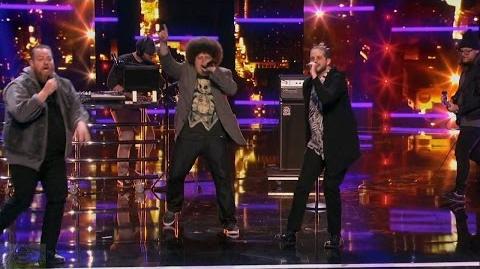